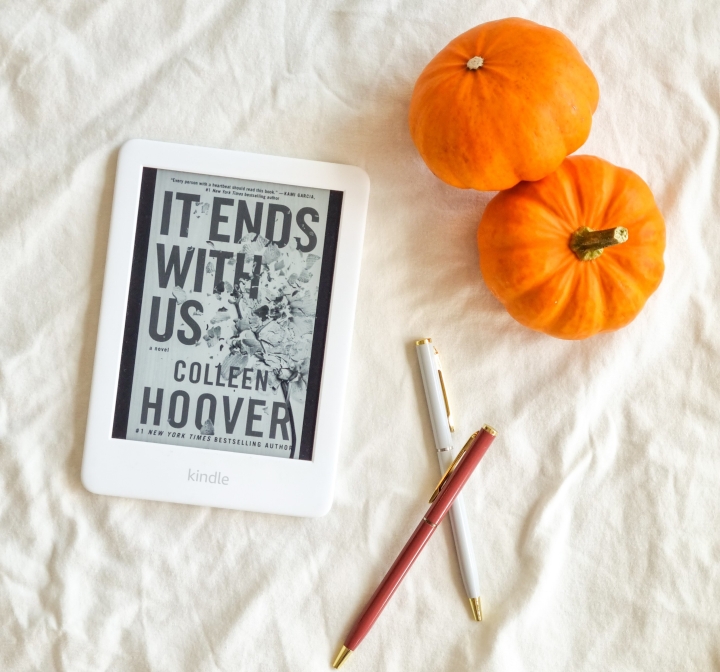 “There is no such thing as bad people. We’re all just people who sometimes do bad things.”

I have to say that the official summary for this book doesn’t do the story justice at all. I understand that the author doesn’t want to give anything away but, I almost passed on this book because I thought it was just another romance novel when in reality, it is way more than that.

It Ends With Us By Colleen Hoover is a story about the complexities of relationships. The main character Lily has recently moved to Boston and is working at a job she doesn’t love when she meets Ryle.  Ryle is a neurosurgeon who seems to be perfect in every way. However, as Lily’s and Ryle’s relationship grows, she begins to see similar signs to her parent’s marriage, which frightens her.  It is at this time when her first love, Atlas, reappears in her life.  Lily and Atlas met while they were in high school; Lily wasn’t happy at school, or home and Atlas helped bring happiness back into her life.  We follow as Lily maneuvers around her relationships, trying to choose the best life for herself.

“All humans make mistakes. What determines a person’s character aren’t the mistakes we make. It’s how we take those mistakes and turn them into lessons rather than excuses.”

I struggled to get into this book at the beginning.  I found the story a bit predictable and slow, as well I found the characters a bit boring.  But I am thrilled to say my feelings changed pretty dramatically after about 6 or 7 chapters. By Part 2 of the book, I was utterly glued to each page. I’m going to try not to spoil the story for anyone, so my review may seem like there are gaps in it but, all I can say is you have to read this book!

The character development and its messaging stand out as probably the most impressive part of this book.  You get to know the characters on a personal, intimate and authentic level which helps you understand the struggles they endure.  Especially when it came to Ryle, I couldn’t help myself from falling into the same traps as Lily found herself in, hoping things would change for them.  This really put things into perspective for me, how difficult these situations are for women; much more complex than most people are aware, which leads directly to the messaging of the book.  I believe the goal of this book was for the reader to understand why these situations are so difficult for women.  People often misjudge women in these relationships, blaming them for never leaving or standing up for themselves but, this book shows so clearly how truly difficult that is. What Lily does, in the end, is incredibly inspiring, and hopefully, this story influences so many other women in similar circumstances.

This story was very close to home for Hoover, and I think she did a great job of keeping her story truthful. Despite the difficulties she had writing it, she kept it authentic. However, there are quite a few difficult scenes in this book, so it’s important you read about the triggers before picking this book up to make sure you are okay with its content.

“Just because someone hurts you doesn’t mean you can simply stop loving them. It’s not a person’s actions that hurt the most. It’s the love. If there was no love attached to the action, the pain would be a little easier to bear.”

By the midpoint of this book, I was connected to each of the characters in this story, wondering how all of this would end up for them.  The characters and the story are so intense and honest; I would never have guessed where my emotions would have taken me in this book. This book has such a great message I really recommend people read it.

“It stops here. With me and you. It ends with us.”

Have you read any of Colleen Hoover’s books? What book would you recommend I read next?

2 thoughts on “It Ends With Us – Book Review”

Hi everyone! I’m Trish, welcome to my book blog. Some of my favourite genre’s include: Historical fiction, Women’s Lit, Contemporary and much more.  Enjoy!