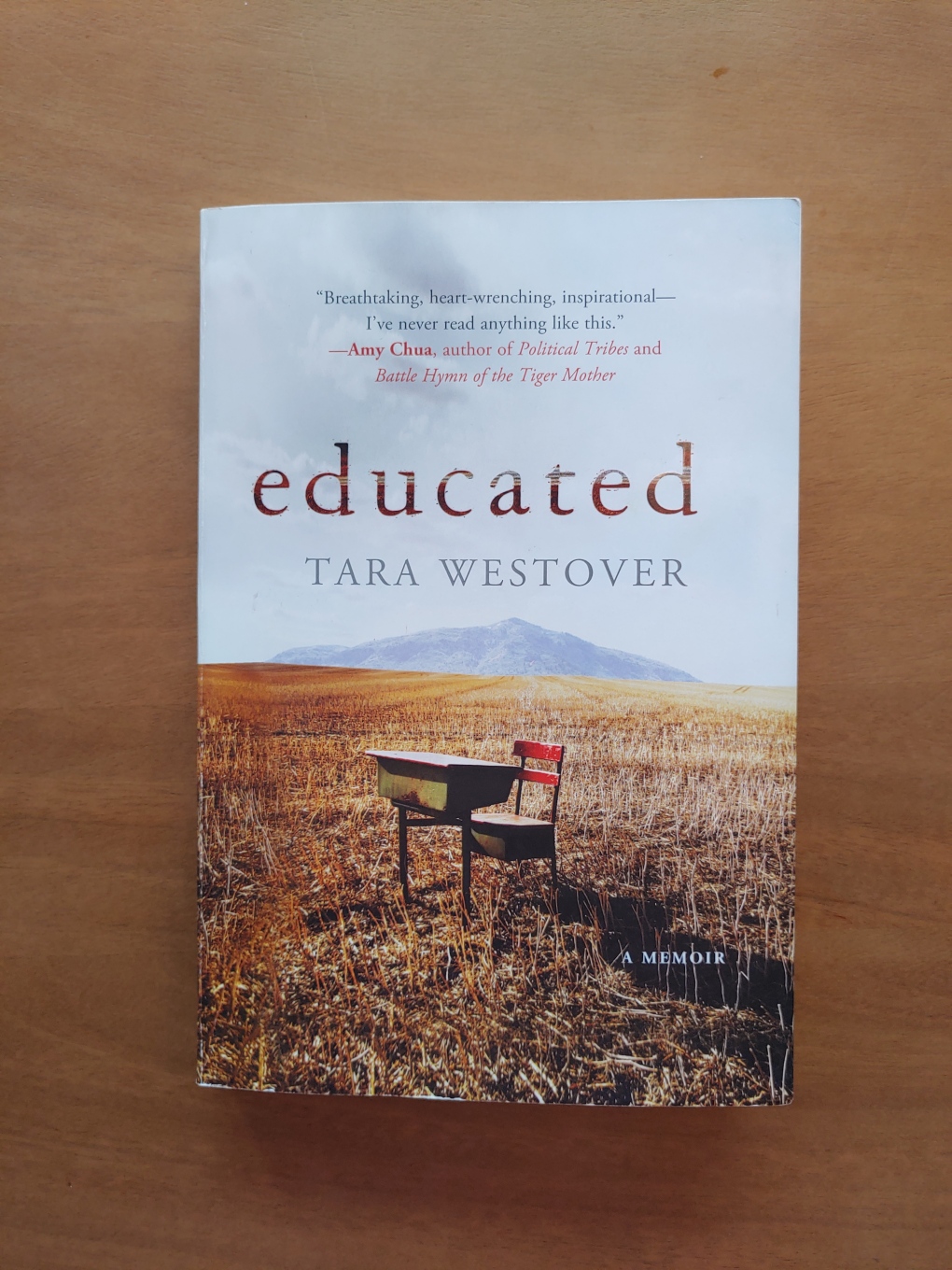 How I came across this book:

I had seen this book on many bookshelves for a while. Every time I read the summary, truthfully, I just wasn’t that interested. I thought I’d heard this story before, a brainwashing family keeping their children trapped by not educating them, ; been there, heard that. Despite my disinterest, something kept drawing me back to the to its cover! I don’t know what it was, but I finally caved. After digging into the first few pages, I started kicking myself. This book is awesome. What was I waiting for?

My Review and what I learned from the book:

Educated by Tara Westover is a remarkable memoir about a Morman family living in Idaho. Each chapter entangles you deeper into her story. It follows Westover’s family life living in their farm house by the mountains.  You see the complexity of the life they lived following their father’s strict interpretation of Mormonism.  She details the physical and psychological abuse she endures from her brother, during her teenage years.  Then we read about the beginning of her exodus from her family as she chooses to go to college and leave home.  Her seclusion from the world is then magnified in college when she learns about world events that she had never heard of, like the Holocaust. In the end you follow her through the final stages of her excommunication from her family.   I kept reading, hoping that things would get better for Tara and her family; I was hoping that something would be done about her brother. Westover keeps you holding on to hope, the same way she holds hope today that she will one day be reunited with her family (under her terms).

Westover wrote about her feelings and thoughts in great detail and clarity. It was easy to read through this book and get a glimpse into her life.

I especially liked that she emphasized, from the very beginning, that this book was not about Mormonism or any other type of religious belief. She wanted to make sure it was clear that she was not putting faith or religion down because, in many situations, other Mormons or people of faith had tried to help her. To me, the real problems were the mental health issues her father and brother faced. Westover shows how bad things could get if people don’t get the treatment they need.

This book taught me more about mental health and how it impacts not only the people who have these health issues but also how it can affect the people around them. I think this lesson is so important for our world right now as we try to gain a clearer understanding of what mental health is and how we can support people who suffer from it.

The themes of this book:

There are many different themes in this book. Some of the themes that stood out to me were: male patriarchy, mental health, physical abuse, psychological abuse, the power of manipulation and the impact of family love. I know that seems like a lot, but, honestly, I don’t think that even covers half of the themes of this book.

In her household, Mormonism was the practiced faith, but as she makes very clear, her family’s version of Mormonism was not standard and far more strict than most other Mormon families. Her father was the clear head of the household, and the wife and children had to listen attentively to the father at all times. She was raised with the idea that the man would be the head, and the women would raise children and tend to household duties. A woman’s role would only be in the kitchen. Throughout the book, her father and brother make many comments to her reminding her that she should be focusing on redirecting her life to be a proper woman and become a housewife.

It is clear from the very beginning that her father has severe mental health problems. His version of Mormonism teeters between faith and insanity. The way he treats his wife and children seems to change daily, rotating between kind and fatherly to authoritarian and angry. I noticed his mental health problems the most during his spats of paranoia. He spent so much of his time and money preparing for the end of time. The whole family spent many days preparing for the end of time, canning fruits and vegetables and storing gasoline. He also forced his children to stay home from school, which is another way he tried to control his family. Many Mormons attend school, and many go on to continue their studies in college and university. In my opinion, her father is a perfect example of what happens when people who suffer from mental health don’t get the help they need.

As well, her brother Shawn clearly suffers from mental health. The way he manipulates and abuses women and finds joy out of their embarrassment are all signs of severe psychological problems. The fact that her brother is still living in Idaho with his family is terrifying.

This theme was probably the most obvious. The violence that Shawn showed towards multiple members of his family was genuinely frightening. After each physical altercation took place, he would manipulate his victims into thinking they were at fault or that he was just playing with them. This was indeed the most frightening part of her brother. Through her portrayal of these incidents, how she felt and how quickly she forgot what he had done, the reader sees why so many abused women go back to their abuser. For this reason alone, I think it is a book that many people should read to gain a clearer understanding of the mind of those that get abused by someone they love.

In the final part of the book, Tara and her sister confront their parents about the abuse they have experienced from their brother. This is the most shocking moment in the book. The way their mother cowers to their father, the way their parents refuse to believe what they are saying, really upset me. Later on, Tara’s sister is manipulated into thinking she was wrong about what she said about Shawn abusing her. Tara’s sister blocks out all of the abuse because of the parents’ manipulation. It is scary to see what the human brain can convince itself with just a bit of encouragement.

Tara struggles so much near the end to figure out how her new educated life can fit into her life with her family. She doesn’t want to lose her family because, ultimately, she does love them. This love keeps her tied to her family; this love keeps her returning to her home town. In the end, she realizes that despite the love she has for them, she cannot go back to that life.

I believe the book’s overall message is by becoming educated; you free yourself to feel and understand the way you want to. Only through this freedom can you live your own life and make your own decisions.